Interestingly enough sandboarding is a fairly new activity, having gained more popularity in certain regions of the world based on climate. Regions in Peru, the Maldives, the United States, Israel and Nambia, among others have become beacons to pioneers of this sport. Most notably Huacachina, Peru is home to the very first Sandboarding World Cup, organized by the International Sandboarding and Sand Skiing Association, which was held this year in June.

I did some extensive research into this area. After all. I am an advocate of the sport. This location is second to none in terms of its location and demography. Huacachina is located in the south west region of Peru in the Ica Province and was built around a body of water believed by local legend to have healing powers. The body of water, which is flanked by sand dunes on all sides, has been named the “Oasis of the Americas”. Its population is minimal and its tourist draw is in the tens of thousands as sand buggy tours, sandboarding and sand skiing increase in popularity.

As this was the first year of the World Cup, there isn’t a whole lot of literature on the event however, the concept will no doubt catch on as athletes from hot climates as well as snowboarders from cold climates participated in the event this year. Participants came from around the world including European countries like France and Italy as well as southern countries like Brazil and Mexico. The United States was not represented this year in the World Cup.

Events like this can help increase the sports participation and popularity which is great for a manufacturer like us. For a small area like Huacachina it can help increase tourism which can aid financially in the preservation of the lagoon and other local attractions. This little resort town is fairly unknown right now, but to the sandboarding enthusiast it is a must-see location. 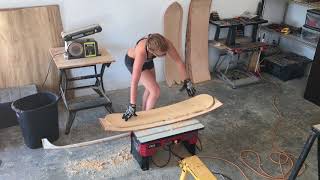